What Authors Can Learn From The Promotion Of Anchorman II

“Anchorman II: The Legend Continues” is the highly anticipated, long overdue sequel to 2004’s “Anchorman: The Legend of Ron Burgundy.” The first film quickly became a cult classic with its quippy one-liners and hilarious cast. The sequel premiered December 18. Leading up to the movie’s release, the “Anchorman” team took promoting the film to another level.

In the year and a half following the announcement of the sequel, there was a museum exhibit, a book, a Ben and Jerry’s ice cream, a new brand of Scotch, TV commercials for the Dodge Durango, an iPhone app, TV cameos, viral videos, a website chock-full of GIFs and a college was even renamed after Mr. Burgundy.

So in the marketing and promotional spirit of Ron Burgundy here are some tips authors can use in the promotion of their own books.

1. Don’t hesitate doing a small town, small market local news show as it might have national implications. ‘Ron Burgundy’ made a guest appearance on a local news program in Bismark, North Dakota. The clip was so funny it was shown on news casts on every network all over the USA. How does this work for authors? I’ve seen my author interviews on local news picked up on by the national affiliates of FOX, CBS, NBC and ABC-TV and shown across their syndicated network. In fact many stories are put up ‘on the satellite’ so other affiliates can grab them and run the story. Sometimes those stories are localized by adding a local twist. Furthermore, the national news desks have people in the news room whose job it is to push and promote those stories to their affiliates. Contact your local news outlet for an interview and don’t hesitate to travel to a small market for an interview. Here’s the infamous North Dakota TV clip in its entirety. 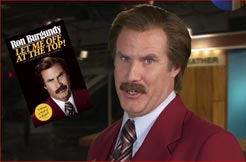 2.Write your own testimonial. In his book Let Me Off at The Top ‘Ron Burgundy’ put his own blurb right on the cover: “I Wrote a Hell of a Book!” Most authors agree their book is “One Hell of a Book” but it’s rather self-serving you won’t be able to get away with it. But who can say that for you? Find that person and get that testimonial. I’ll often ask an author if you could get anybody to blurb your book who would it be? Make a list of the top ten. Then if it’s in the realm of possibilities go out and get it. Check out the Let Me Off at The Top book trailer here:

3.Be willing to travel all over the country. ‘Ron Burgundy’ went from North Dakota to Connecticut, to Los Angeles and New York. Obviously travel costs money but, so does obscurity. If nobody knows about your book what was the point in writing it? Your book is a ‘start-up’ spend time and money to promote it. Get your name and your work out there and as far out there as possible. Don’t settle for “hometown press” with the headline “local man/woman publishes book” story. Take your work and promote yourself across the country. Look to special events like book festivals across the nation that you can tie to your book. Check out my list of book festivals and plan to attend a few.

4. Target internationally. “Comedy is very subject to local and cultural sensibilities,” Andrew Runyon, Paramount’s Vice President of interactive marketing points out. “It requires a little bit more customization.” In order to be equally relevant and funny in America as well as abroad, Will Ferrell created some videos for markets in the U.K., Ireland, and Australia. How can an author do this? Delve deep into the messages, themes, and characters of your book. Think about different cultures and how they might perceive your work. Make your book appeal to different nationalities. Show them why your book is as relevant in America as it is in Italy or England. YouTube goes worldwide, so does your Pinterest page and so do most press releases. I get phone calls and inquiries from all over the world requesting my authors conduct interviews. If you are not trying to get attention worldwide it won’t happen by itself. Check out this clip from Australian TV.

5.Ron Burgundy clips are shown on local newscasts. Context is key. “Part of the reason these clips work so well is that it’s placing Ron Burgundy in a modern context, something that adds a fish-out-of-water element to his already goofy charm,” says Drew Taylor of indiewire.com. Ron Burgundy found his niche in broadcast journalism. Think about where your book fits in best. A restaurant chef protagonist might sell well in Sur La Table or Williams Sonoma. A murder mystery book might gain press at a murder mystery themed weekend getaway. A lifestyle book may be picked up in a hotel bookstore that’s renowned for team-building activities or company retreats. 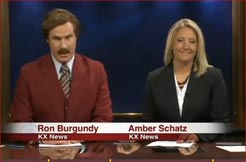 6.Stir up a little competition with your readers. AdWeek.com’s Christopher Heine explains,” Working with Zemoga, Paramount is employing a social media-styled casting call. The talent show-like initiative, ‘Join Ron’s News Crew,’ asks people from around the world to audition for the positions of anchor (#TeamRon), meteorologist (#TeamBrick), sportscaster (#TeamChamp) and live reporter (#TeamBrian).” The people auditioning will post their videos online and hashtag which team they’re on. Start your own social media competition. Encourage fans to submit videos, GIFs, artwork, or stories to win a competition of your choosing. Your fans could create the cover art or choose an alternate ending. They could win a day in the life of your lead character or be chosen to have a private lunch with you, the author.

7.Think big, but also think small. The Anchorman II promotional team was especially proud of their collaboration with Tumblr. Nine animated GIFs were pieced together in order to create a socially embeddable poster for the film. Cliff Marks, president of National CineMedia feels it is possible for GIF mashups to be the future of movie posters in this digital age. “These small, chewable formats are a cool way to present your content,” he says. “And the studios are starting to make that content a focus.”

The Bottom Line: Think like Ron Burgundy and consider some non-traditional marketing methods to get your book on the radar. If you ever want to become a top selling author get some swagger, step over the line and steal a line from Ron Burgundy, “I don’t know how to put this but I am kind of a big deal.”

About the Author
Book publicist Scott Lorenz is President of Westwind Communications, a public relations and marketing firm that has a special knack for working with authors to help them get all the publicity they deserve and more. Lorenz works with bestselling authors and self-published authors promoting all types of books, whether it’s their first book or their 15th book. He’s handled publicity for books by CEOs, Navy SEALS, Homemakers, Fitness Gurus, Doctors, Lawyers and Adventurers.His clients have been featured by Good Morning America, FOX & Friends, CNN, ABC Nightly News, The New York Times, Nightline, TIME, PBS, Los Angeles Times, USA Today, Washington Post, Family Circle, Woman’s World, & Howard Stern to name a few. Learn more about Westwind Communications’ book marketing approach at http://www.book-marketing-expert.com or contact Lorenz at scottlorenz at westwindcos.com or by phone at 734-667-2090. Follow Lorenz on Twitter @aBookPublicist.