While many on the move worry about selling their old homes through realtors and financing their new ones through mortgages, Eric and Mark Guidobono are building multi-million homes at Tuscany Reserve.

The subdivision, located off Eight Mile Road west of Beck Road, is currently under development. The community has the potential to fill its 77 acres of land with 58 homes sized at 4,000 square feet and up in two phases over the next five years. Such custom-built homes will cost between $800,000 and $3 million, with most averaging between $1.5-1.8 million.

“We felt there was a need for it,” Eric Guidobono said. “We’ll always have people in this market looking for custom built homes. We get 20 couples in to look at the homes every weekend.” 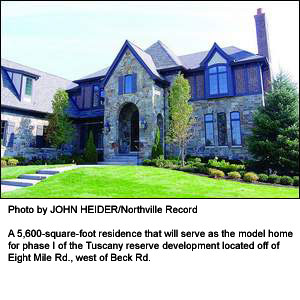 Other shared communities include The Bellagio in Novi and Woods of Edenderry in Northville, where homes run between $800,000 to $1 million. They also built 50-60 homes at Pheasant Hill in Northville and a number of individual locations and subgroups.The Bellagio, located off Beck Road south of Nine Mile Road, is one of Novi’s most expensive communities. It reached its capacity in November, six years after it was built, filling up with entrepreneurs, auto executives, Internet and wine investors, professional athletes, a commercial cement contractor and others.

“It’s the same type of product,” Eric said of Tuscany Reserve. “The interiors all have custom trim work. The standard specifications are generous compared to competitors.”

The Guidobonos decided it was time for a new task down the road, creating a subdivision that will feature many energy efficient aspects. Other available features include a pool, $50,000 home theater, 2,000-bottle climate-controlled wine cellar and a variety of architectural and landscaping options.

“We’re trying to give it a more European flavor of architecture, not cookie cutter,” Mark Guidobono said. “Whatever the customer wants, we deliver.”

Mark, an avid traveler who just returned from an 11-day moose hunting trip in Alaska, also said the subdivision’s location will be a prime selling point, as is with most Novi properties because of the nearby expressways.

“We’re positioned. We’ve got a great location. We’ve got the perfect storm coming in. Now is the best time to buy. We’re able to buy labor and most materials cheaper than we could’ve four years ago.

“All price ranges have been impacted (in) real estate have been impacted by the automobile industry,” Mark said. “There’s a slump from overbuilding, but (Michigan) isn’t as overbuilt as other areas like Florida, California and Arizona. We feel it will turn around here sooner.”

The industry is looking good for not only builders, but potential home buyers as well.

“Labor costs are competitive. Buyers get more house for their money. They get a good bang for their buck,” said Scott Lorenz, president of Westwind Communications and spokesman for Tuscany Reserve.

Although home shoppers may find better deals in the current hard economic times, many are also willing to spend less to purchase a home.

“People shopping in the $5 million price range in 2002 are down to $1.5-2 million,” Eric said. “We hit the market right at the really bottom. It’s going to be slow sailing for the next year or two.”

Eric said they’ve had to scale down homes from 5,600 to 4,600 square feet to make it more affordable, but the brick and stone structuring adds back into the price, as does the architectural detail on the homes.

Mike Fontana, former president of the Michigan Mortgage Association, said a mortgage on a $2 million home could cost about $11,700 per month, which can vary depending on principle interest rates, property taxes and homeowner’s insurance.

He said the narrow market is a special niche commonly filled by successful white-collar professionals, but it will still see the same problems as the rest of the industry.

“It’s definitely a challenge right now. With income, credit and whether they have a house to sell, it can be a big predicament,” Fontana said. “Because the market is oversaturated, they would have to drop the price (of their current home), which creates less equity for down payment for the next home.”

Although costly, the Guidobonos think it’s quite a deal.

“There’s nothing like this on this side of town,” Eric said. “It’s a one of a kind development.”