Authors: Tap Into The Power of FREE with Amazon’s KDP Select

You are here: Home1 / Authors: Tap Into The Power of FREE with Amazon’s KDP Select

Authors: Tap Into The Power of FREE with Amazon’s KDP Select

A very economical option all authors have at their disposal is giving their book away for free. There are no costs when giving away a digital book. Should you decide to hand out 700 ebooks or price them at 99 cents on Amazon, it’s not costing you, the author, anything. In fact, you’re advertising your book gaining exposure without spending the money to print it or distribute it.

Some authors might be reluctant to give their work away for free, which is understandable. Most authors have spent months or even years working on their books. Naturally, they would want people to pay for their time effort. However, when you look at the situation from a marketing standpoint, you begin to understand that you have to give a little to get a little. Then, it becomes more about making the sale and promoting your work than having people pay for your book upfront.

Free is not new. Giving items away for free has worked in various industries from farmer’s markets to the software industry. Evernote’s CEO, Phil Libin, said, “The way to get a million people buying your product is to get a million people that are using your product.” As an author, you start by giving away a book or a chapter at a time, to get people into the first book. Then, they’re moving on to the sequel, then end up buying your entire series because they became invested either in the characters you’ve developed or the useful information and insight you provide.

Social media outlets, such as Facebook and Twitter are great resources to engage someone within a special interest audience. On Twitter check out the hashtags for each area of interest such as #kindle #baseball #sciencefiction and include them in your tweets. Those will then get the attention of the people who follow that list.

Starting relationships with people will get them interested in you and ultimately your book. For example, in John Locke’s book, How I Sold 1 Million eBooks, he explains how he would create relationships with his readers by visiting their blogs and leaving comments or tweeting back and forth with people. That led to his readers checking out his website and buying his books on Amazon.

One of my clients, Salahuddin Khan, used Amazon’s Kindle Direct Publishing (KDP) Select program with great results. Through Amazon, his book was offered Free for Kindle downloads for 5 days to all Amazon Prime members. Within just the first 24 hours, his book Sikander was downloaded 8,500 times! During that time, his book was the number 1 free downloaded book. 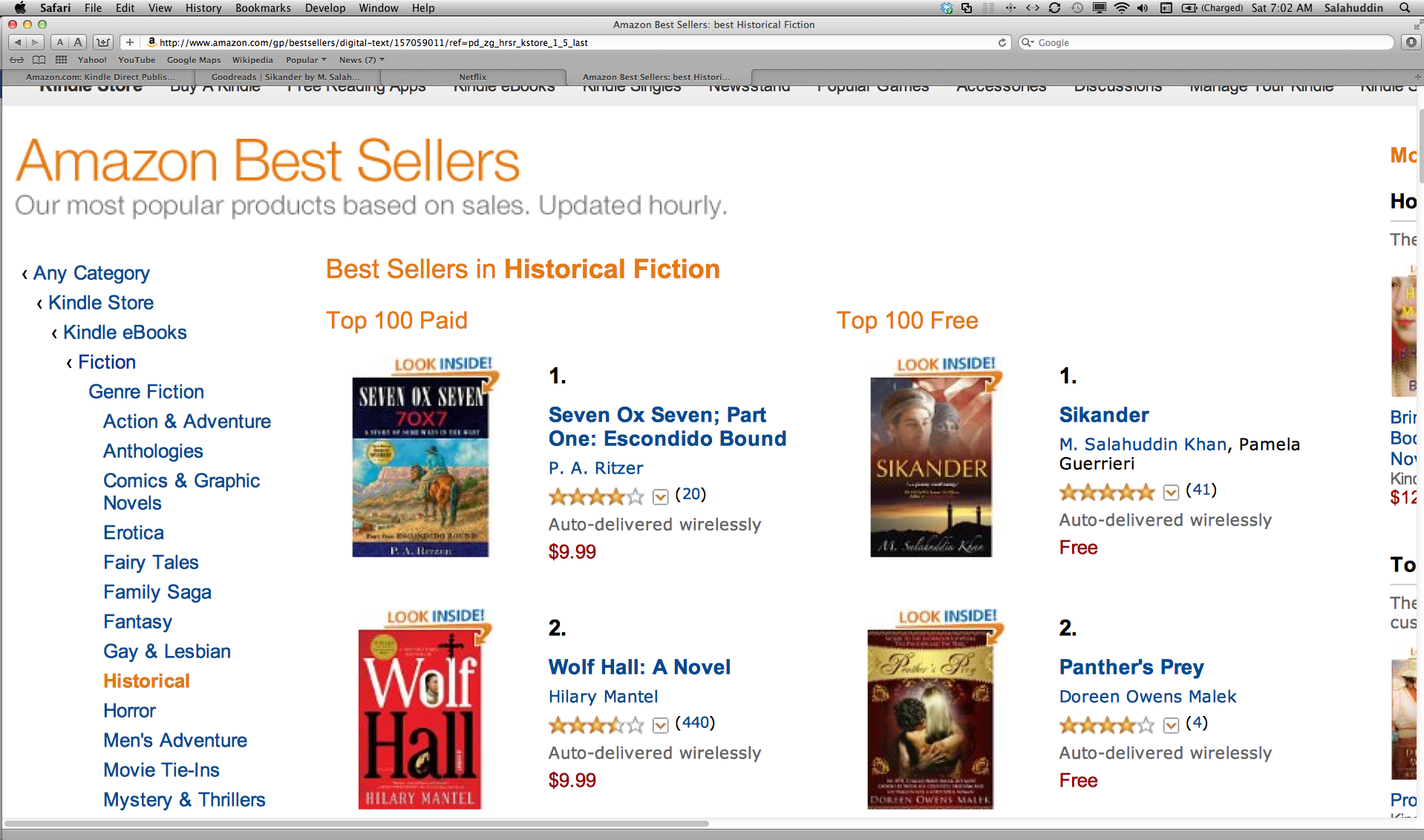 In an article from the website Indie BookSpot, John Warner addresses the popular question, “Is Amazon’s KDP Select worth it?” Warner explains, “It’s clear that from a purely economic point of view, KDP Select makes sense to authors who sell their books in the 35% royalty bracket. For these authors, a single borrow can be worth four or five actual sales. For authors whose books are in the higher price brackets, though (i.e. over $2.99), the situation is much less clear because a borrow is worth less than a purchase. For these authors, the question is whether KDP Select still offers enough increased exposure to increase overall interest enough to compensate for any lost purchase income.”

To support Warner’s point, Salahuddin Khan expressed his views on using KDP Select for Sikander. “I have to reflect on how pleasantly surprised I’ve been with the KDP Select Program on the Amazon Kindle. While it requires suspending marketing through other digital outlets (like Nook, Smashwords and eReader), those others were producing very little anyway. The program offers titles a share of a monthly dollar pool which is based on the proportion of a title’s loans on the Kindle to the total loans. But it also allows a free download giveaway program to run for up to 5 days. At just 24 hours after kick-off, SIKANDER had 8,500 downloads and was ranked #1 in all Historical Fiction free Kindle downloads and was #13 in the broader Fiction category free downloads, while being #15 across all categories. That means SIKANDER shows up in a lot more places and has the opportunity for a lot more reviews. It was also featured more in the “also bought” groupings with other more prominent books. So, all in all, without it costing me any more than the possibly 1-3 paid sales I might have had in the same period I now have 15,656 self-selected downloads and 15,656 people heard of my book and may tell a friend about it too. It’s been a great marketing tool for almost no cost.”

Joanna Penn of the website The Creative Penn wrote an article titled “Why Amazon’s KDP Select is God’s Gift to Authors” in which she makes several useful points. First, she points out that the KDP Select program does not care if you are a traditionally published author or a self-published author. “Enrolling your book gives you a chance to show the world what you can do, no prejudices, no preconceived notions. This is American Idol for writers at its best. You place your book on the stage, and if the cover is great and you’ve earned a few quality reviews, you’ll move to the next level of judging. There isn’t really a system of pass or fail, but if readers find your book attractive, it’ll sell in the Free Store. And I’m not talking about hundreds of readers.I’m talking about thousands, maybe tens of thousands.” Simply put, you will be able to allow people to read your work and take it for face value- literally.

Author Russell Blake wrote about his experience with Amazon’s KDP Select on his website. He wrote, “I dipped my toe in the water by making The Geronimo Breach free for three days. During that time, I saw about 12K downloads. Not too shabby. Then, when it went back to paid, a funny thing happened. After languishing for the first day, it shot like a rocket, finally hitting #165 in the paid kindle store.” Clearly, Blake benefitted from offering his book for free before charging for his work. He gained a great deal of publicity and thus was able to profit quite a bit when he charged for his book.

Based upon my many conversations with authors and experts on the topic I’ve concluded that the Amazon KDP Select program is a must for any author. One key is to have several high quality reviews of your book from top Amazon reviewers posted to your book site before you start. People have to make a snap judgment on the downloads so they’ll tend to trust third party reviewers and any awards the book has won when making that download decision. In addition, your cover art as always needs to be attractive and descriptive about what is inside the book.

Word of warning. Be sure you read the fine print on the Amazon KDP program. Many authors are surprised about Amazon’s enforcement of the exclusivity clause in the agreement which prohibits your book being sold on other online sites like Smashwords, Nook or iTunes for 90 days. Beware!

Bottom Line: Weigh all factors and I think you’ll agree that the upside potential is huge. That’s why I recommend you “Tap in the Power of FREE!”

About the Author
Book publicist Scott Lorenz is President of Westwind Communications, a public relations and marketing firm that has a special knack for working with authors to help them get all the publicity they deserve and more. Lorenz works with bestselling authors and self-published authors promoting all types of books, whether it’s their first book or their 15th book. He’s handled publicity for books by CEOs, Navy SEALS, Homemakers, Fitness Gurus, Doctors, Lawyers and Adventurers. His clients have been featured by Good Morning America, FOX & Friends, CNN, ABC Nightly News, The New York Times, Nightline, TIME, PBS, Los Angeles Times, USA Today, Washington Post, Family Circle, Woman’s World, & Howard Stern to name a few. Learn more about Westwind Communications book marketing approach at http://www.book-marketing-expert.com or contact Lorenz at scottlorenz at westwindcos.com or by phone at 734-667-2090. Follow Lorenz on Twitter @aBookPublicist.