You are here: Home1 / save cash realty 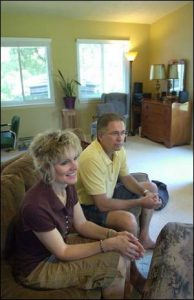 .
Joan and Guy Ballamare of Canton are using a new way to sell their house.

When Joan Bellemare describes her 1,500-square-foot ranch home on 2.1 acres in Canton Township, it sounds like a little piece of heaven on earth.

“It’s close to everything you need, but yet it’s like being Up North, the deer just pass through here,” said Bellemare of the three-bedroom home with cathedral ceilings, a walk-out basement and five-car garage. “It’s so peaceful, your blood pressure drops 10 points when you come up the drive.”

However, with home sales on a downward spiral and mortgage foreclosures at record numbers, not even the gods are smiling on this slice of heaven, much to the disappointment of Bellemare and her husband, Guy. 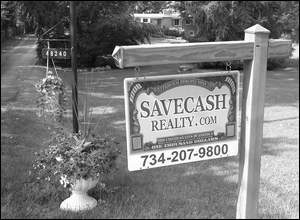 SaveCash Realty is a new way to sell a home.

“We’ve had it on the market for about a year,” said Joan Bellemare, “but, we’ve only had a few nibbles.”

The Bellemares, whose home was appraised at $400,000 last year, started with a selling price of $385,000. Since then, they’ve dropped it several times, and are still having trouble getting interested buyers at $349,000.

Sara is Sara DiCiesare of St. Clair Shores, who along with partner Carl Schultz of Canton Township, started Save Cash Realty, Inc., located in office space on Ann Arbor Trail in Plymouth. For a flat-rate fee of $599 for six months, Save Cash will list a property on MLS, the Realtor multi-list service, Google and a number of other on-line sites. 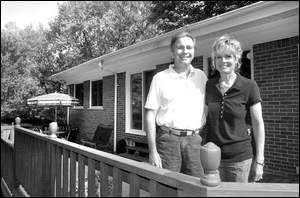 Joan and Guy Bellamare are using a new way to sell their house.

In most real estate transactions, the seller pays a 3-percent listing fee plus another 3-percent commission to the real estate agent who sells their home. With Save Cash, the seller pays only 3 percent to either DiCiesare’s company, or the selling agent, resulting in a 50-percent reduction in commissions. In the case of the Bellemares, the savings would be $10,500.

“We saw a decline in the market, people who bought condos and couldn’t re-sell them for what they owed because they couldn’t pay the commission,” said DiCiesare, who previously sold luxury condominiums in Detroit. “This is saving them from coming to the closing with money because they can lower their house by the 3 percent they’re saving with us and be more competitive in the market.

“We’re getting a good response from other Realtors because they’re getting their full commissions,” she said. “We’re the ones taking the cut.”

While the Bellemares are getting little response from buyers, they blame the economy, not Save Cash.

“I like it (Save Cash) because it’s saving the 3 percent we’d pay to a listing agent,” Joan Bellemare said. “We get the exposure on the Internet, she puts the sign out front, makes a professional-looking flier and fields the calls. She continues to work with us like a regular Realtor.”

Gordon McCann, president of the Western Wayne Oakland County Association of Realtors, said there are a number of business models for selling property.

“Every company out there is trying to have a competitive advantage, to make their way of doing business distinctive,” said McCann, who is a Realtor at Coldwell Banker Schweitzer Bake in Plymouth. “Sellers I work with today are looking for innovative ways to get their homes recognized by potential buyers, not just on the MLS. It’s the program that gets people through and generates offers that makes them happy.”

Schultz said he invested in Save Cash after adding up the amount of commissions he paid while investing in real estate.

“It was a bit frustrating to pay such fees every time I moved a piece of property,” Schultz said. “This is a terrific means for people to sell their home, but not give away 3 percent of the equity.”

“So far, it’s been a little slow because people don’t believe we’re for real,” admitted Schultz. “Our office in Plymouth is for real, just our pricing isn’t.”

Save Cash Realty is located at 496 W. Ann Arbor Trail, Suite 202, in Plymouth, or at http://www.savecashrealty.com/.