Pen Names: To Hide or Reveal That’s the Question For Authors

A rich tradition has existed for hundreds of years for fiction writers to use pen names. The most famous pen name, of course, was Samuel Clemens writing under the name Mark Twain.

A lesser known use is Romance writer Nora Roberts who uses the pen name J.D. Robb when writing suspense novels.

Alice in Wonderland was authored by Lewis Carroll which was a pen name used by Charles Dodgson who had gained a considerable reputation as a mathematician and didn’t want to create confusion by writing fiction under his real name.

As a book marketing expert, 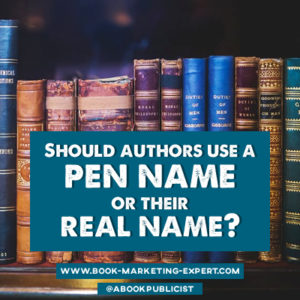 I have represented a long list of authors, some of whom have chosen to use pen names. Others have asked me about the wisdom of using a pen name. My general response is to advise against a pen name but there are good reasons not to sign a book with your real name.

Nora Roberts certainly has a marketable name. After all, her name has appeared on the NY Times Best Seller List for a combined 660 weeks  100 weeks in the number one spot. Over 280 million copies of her books are in print, including 12 million copies sold in 2005 alone. So with a marketable name like that, why would Nora Roberts ever want to use a pen name? (By the way, Nora Roberts also is a pen name; the author was born Eleanor Marie Roberts).

In 1992 Putnam publishers asked Nora Roberts to come up with a second pen name because they could not keep up with the prolific writer’s romance novels let alone the new genre of romantic suspense novels she wanted to write. So she took the initials J.D. from sons Jason and Dan and shortened Roberts to Robb. She also has written under the pen names Jill March and Sara Hardesty.

One of my clients served as a Navy Seal in the Iraq War and then returned to write a book on the war that was critical of Islam. To protect his personal safety and maintain security for his family, my client wrote under the pen name Chuck Bravedy. The author was concerned that extremists living in America would be offended and angered by his controversial book and come after him or his family.

My biggest concern for Chuck Bravedy was security. Could one of these terrorists hunt him or his family down and kill them? What if an extremist was offended by an opinion in the book or by something my client said in an interview? (Think about Salman Rushdie). It’s harder to find somebody who’s not in the phone book,  so to speak. Being anonymous can be a good thing. The fact that Bravedy’s name was  not in the phone book raised some attention from the Pentagon who called me to inquire about Chuck Bravedy because they did not have his name in their files. The Pentagon was concerned because they want to keep phonies from impersonating military officials.

One client I represented, who asked my advice about using a pen name, was a former CIA operative. He was concerned about the impact a pen name would have on promoting his book. He wondered whether radio and TV interviewers would be willing to use the pen name during an interview or would insist on using his birth name. Some CIA friends of my client also had published books and used their real names without problems. To cover his bases while he decided the former CIA officer went ahead and registered web domains under his real name and under his pen name. After talking with him about the options my client decided to use his real name.

I also have represented authors who used a pen name because they had a past they were not proud of and wanted to protect their family members and loved ones from public embarrassment.

From a marketing standpoint if your real life identify is associated with a business and you want the book to promote your business, or vice versa, then a pen name should not be used. But if you have success, and don’t want that success threatened by pursuing an avocation of writing, then a pen name would be in order. Pen names may create marketing challenges, most of which can be overcome, and so the marketing implications need to be examined before publishing.

Reasons for using a pen name include

If you want to hide from the public and from the people you work with or worked with, etc., then a pen name is fine. But, if it’s not important then why bother? So, my vote is to use your own name. Here are just a few points to ponder.

If you want to brand your name for speaking gigs or for consulting engagements then use your own name. Furthermore, if you are planning to write a series of books then using your own name makes the most sense to me.

About Scott Lorenz
Scott Lorenz is President of Westwind Communications, a public relations and marketing firm that has a special knack for working with doctors, lawyers, inventors and authors. His clients have been featured by Good Morning America, FOX & Friends, CNN, ABC Nightly News, The New York Times, Nightline, TIME, PBS, NPR, the Los Angeles Times, USA Today, Washington Post, Family Circle, Woman’s World, & Howard Stern to name a few. To discuss how Westwind Communications helps its clients get all the publicity they deserve and more, call 734-667-2090 or email:[email protected] Visit: https://www.westwindcos.com