She wasn’t even wearing heels. But on the sidewalk near the Southfield law firm where she works, Arlene Bordman’s loafer got stuck in a crack and “I went right over and landed on my mouth.” A few weeks later, she felt something rattling and loose in her upper jaw. Her dentist ended up pulling out her upper four front teeth, just six weeks before her son’s May 30 wedding.

Bordman, 68, of West Bloomfield got through the wedding wearing a flipper: fake front teeth attached to a smooth acrylic denture molded to conform — with a little dental adhesive — to the contours of the palate. While it looked good, she felt like she had to relearn how to talk. It didn’t give her the strength to bite into chewy bread.

“I took it out and I looked like an old, haggard lady. I had no lips,” said Bordman, who prides herself on being physically active.

Her dentist recommended she visit Dr. Timothy Kosinski, a Bingham Farms dentist who specializes in dental implants. In September, in the space once occupied by the roots of Bordman’s front teeth, Kosinski inserted two titanium implants, screw-like devices, into her upper jawbone. The procedure lasted about 30 minutes with local anesthetic. Over the course of the next three months, the screws fused with Bordman’s jawbone.

Onto the screws, Kosinski threaded an abutment, which holds tightly to four replacement teeth. No more flipping her flipper in and out of her mouth. Bordman has her bite back.

“I am like a new person. It’s so great. I can eat anything I want to,” said Bordman. “I’m a bread person, and I like a good thick roll or sandwich. And I can enjoy it now.” 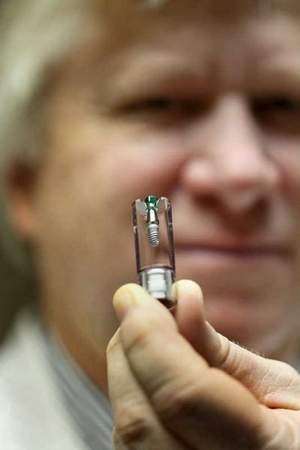 Bordman is not alone with her dental woes. Statistics show that 7 out of 10 adults ages 35 to 44 have already lost one tooth due to accident, gum disease, or a failed root canal, according to the American Dental Association. By the time Americans reach their mid-70s, 1 out of 4 has lost all permanent teeth.

Before dental implants, the only alternatives were removable dentures or a fixed bridge, which can affect adjacent healthy teeth and often needs to be replaced after several years.

Dental implants are growing in popularity because of their long-term durability. With the aging baby boom population and advances in techniques, dental implants have exploded in use.

“Especially in the last 10 years, there’s been an exponential growth in the placement of dental implants for missing teeth,” said Dr. Monish Bhola, an associate professor and codirector for implant dentistry at the University of Detroit Mercy Dental School. “It’s really the next best thing to an actual tooth. It’s anchored in bone.”

Most implants last for decades.

The small percentage that fail, said Bhola, usually are due to other health issues, such as a patient being diabetic, or a heavy smoker or just not taking care of one’s teeth — be they real or replacement.

It can be a costly procedure. In the Detroit area, Bhola said the implant procedure for one tooth can cost about $2,500 to $3000.

Insurance carriers typically haven’t picked up implant costs, Bhola said. But that’s beginning to change, he said, because of the long-term benefits of an implant compared to a dental bridge. With a bridge, the replacement tooth is secured to adjacent teeth, and that involves filing and capping otherwise healthy teeth to secure the fake tooth in place. That opens the door to weakening the healthy teeth, which can undermine the longevity of the bridge.

“There are more chances for these adjacent teeth to develop problems because you’ve cut into them,” said Bhola. “If you look at the cost of a bridge with one tooth, it ends up being about the same as an implant.”

University of Michigan Dental School professor Michael Razzoog said “the biggest thing with implants that a patient needs to hear first is that implants preserve bone.” That forestalls other future problems, such helping keep teeth aligned and reducing gum disease.

Implants can replace one tooth or many. In some cases, dentures are screwed securely onto implants, alleviating the tendency for dentures to slip, become dislodged or otherwise embarrass their users. Once it’s placed in the jawbone, the screw-like implant isn’t visible.

Kosinski, who is a fellow in the American Academy of Implant Dentistry, has been doing them since 1984 and says a workday doesn’t go by without him doing an implant.

“It’s become very routine, because in many situations, it’s not traumatic. There are no pain receptors in bone. There’s little bleeding, no stitches,” said Kosinski.

Human bone grows onto the surface metal so it becomes a permanent part of the jaw, said Kosinski. After three to six months of growth, a permanent replacement tooth made out of porcelain is cemented onto the implant.

Kosinski said patients who have implants to support their dentures increase their chewing efficiency by 60%.

“Patients can chew things they couldn’t chew before, like lettuce or grapes, because they have more force and stability,” said Kosinski. “And once that happens, they often eat healthier foods.”

Dr. David Banda’s Bloomfield Hills dental practice is now about 50% implants, and he said he finds the most satisfaction from doing implants on people who’ve long struggled with dentures.

“I get the most warm fuzzies from denture patients,” said Banda. “They withdraw from life as they become dental cripples. They feel they can’t sing in a choir because their dentures may fly out.

“Once I snap the dentures on the implants, they start walking more upright,” said Banda.

He recalls one patient who told him what she missed most in life was biting into an apple. On the day Banda finally secured her dentures to an implant, he also gave her an apple.

“And she started crying,” said Banda.

Kevin Brennan, 49, a Realtor from Grosse Pointe Woods, was in Kosinski’s chair this week, getting his new fake tooth attached to his implant to replace tooth number 20, on the lower left side of his jaw.

The tooth had decayed because of a root canal procedure many years ago. His dentist sent him to Kosinski, who took out the bad tooth and inserted an implant about three months ago.

During the implant, Brennan said he was under local anesthetic and felt pressure from the dentist drilling into his jawbone.

“This is as easy as I could have imagined having a tooth replaced,” said Brennan. He said a bridge might have been a little cheaper, but he didn’t like the idea of altering the adjacent teeth to hold the bridge.

“This is the only implant I have and the only one I ever intend on getting,” said Brennan. “Provided I take care of my teeth, it should last a lifetime.”

About Scott Lorenz
Scott Lorenz is President of Westwind Communications, a public relations and marketing firm that has a special knack for working with doctors, lawyers, inventors and authors. His clients have been featured by Good Morning America, FOX & Friends, CNN, ABC Nightly News, The New York Times, Nightline, TIME, PBS, NPR, the Los Angeles Times, USA Today, Washington Post, Family Circle, Woman’s World, & Howard Stern to name a few. To discuss how Westwind Communications helps its clients get all the publicity they deserve and more, call 734-667-2090 or email:[email protected] . Visit: https://www.westwindcos.com