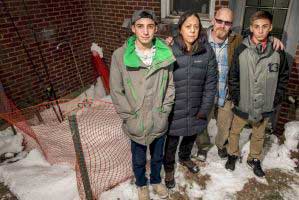 A Lido Beach couple has started the latest leg of their eight-year effort to gain more than $2 million in damages related to a neighbor’s oil tank leak contaminating their property.The dispute is now before State Supreme Court Justice F. Dana Winslow in Nassau County to determine the amount of the award in the case that has pitted neighbors against each other and insurance companies, and led one family to leave its home at times.Lynn Eskenazi and her husband, Steven Kritzberg, seek $2.4 million in expenses and damages, down from their original $2.6 million request, their attorney, John Pittoni of Garden City, said in court last week.Eskenazi, whose house is on Eden Road, said in an interview that “the oil was in our crawl space and terrible, getting into our clothes, furniture, even hair. There’s no telling what it’s doing to our health.”The dispute started in October 2005 when she and Kritzberg learned that the 275-gallon underground oil tank of next door neighbors, Robert and Deborah Mackoul, was leaking and contaminating the soil. They sued the Mackouls to clean up the contamination.

Eskenazi, Kritzberg and their two children still live in the house, but said the oil smell has forced them out four times since 2005.
The Mackouls did not attend the Jan. 21 hearing and did not return calls for this story.

“We want to resolve this case as soon as possible . . . within the limits of the policy,” Curtis Sobel, the Huntington lawyer representing the Mackouls and the Hanover Insurance Group of Worcester, Mass., said, adding that those limits are about $1.4 million. He said he did not represent the second Mackoul firm — One Beacon Insurance, based in Bermuda — but spoke for them.

Winslow in September ordered enforcement of a February 2012 agreement by the two sides after the insurance companies tried to rescind the agreement.

They argued that testing under Eskenazi and Kritzberg’s house after the agreement was reached showed the site could meet state Department of Environmental Conservation safety requirements for about $60,500 instead of the estimated $1 millionplus to raze the building, clean the soil, and rebuild the house as outlined in the agreement.

Winslow said in his decision ordering the agreement enforced that “there existed sufficient soil contamination to warrant regulatory intervention.”

The insurance companies have filed a notice of appeal that allows them six months to challenge Winslow’s Sept. 27 ruling.

The hearing on the award amount is to resume Feb. 25.

After a nine-year lawsuit we turned to Scott Lorenz. He was worth every penny!
https://www.westwindcos.com/testimonials/lynn-eskenazi-plaintiff-new-york/

Scott Lorenz cut through the clutter of our patent lawsuit and made sense of it all.
https://www.westwindcos.com/testimonials/jeanne-foulon-esquire-deposition/

Our law firm would be half the size it is today without Westwind Communications.
https://www.westwindcos.com/testimonials/terry-l-cochran-lynn-foley-attorneys/

Just the threat of using Scott Lorenz made one deadbeat pay up!
https://www.westwindcos.com/testimonials/mark-gordanier-plaintiff/

Scott Lorenz is one of the very few PR and marketing professionals I recommend.
https://www.westwindcos.com/testimonials/jess-todtfeld-former-fox-news-producer/

Outside the courtroom Scott Lorenz is the best friend you can have.
https://www.westwindcos.com/testimonials/john-hunt-attorney-las-vegas/

When it comes to promoting our lawsuits Scott Lorenz is my secret weapon.
https://www.westwindcos.com/testimonials/attorney-vocem-sine-nomine-audivit/