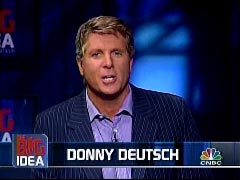 Just about every guest on the very popular business program “The Big Idea with Donny Deutsch” on CNBC, 10pm ET, cites ONE thing that propelled his or her business. What was it?

The answer is: Publicity, PR! It’s the one common theme that runs through the entire program.

As a publicist I’ve known this for years. I’ve seen media exposure launch everything from new medical procedures to special events and inventions. Why does it work? It works because PR is the bridge that connects large audiences with a single person with The Big Idea. How do you get it? You can do it yourself up to a point or allocate some money for a publicist.

That’s because having The Big Idea is not enough to produce success. The Big Idea must be shared with consumers, buyers, producers, manufacturers, readers, patients, literary critics – whomever is the desired audience. And that’s clear whenever you listen to guests on “The Big Idea with Donny Deutsch.”

Hooters Restaurants did not draw diners until the founding partners, a bunch of drinking buddies, convinced a bikini contest winner to pose for a Hooters billboard. At the same time, the partners got media coverage about a sports celebrity who ate regularly at the restaurant. Overnight, the lines for seating began to form at the original Hooters which is now a billion-dollar corporation with restaurants around the world.

Danny Deutsch himself illustrates how PR can transform The Big Idea into the American Dream come true – doing what you love and making millions! Deutsch, also an expert in publicity, transformed his small advertising business into one of America’s top 10 agencies and now heads a $2.8 billion full-service agency serving such clients as Johnson & Johnson, GM, IKEA, and DirecTV. Deutsch continues to use PR to grow his agency by writing books and establishing himself as an expert with his CNBC TV show.

Another guest on “The Big Idea” that warrants mention is Raphael Yakoby who seven years ago was a college dropout without business experience. The only thing he had was The Big Idea and the skills to tell his story. He created the first blue liqueur and ignoring advice that no-one would buy a blue beverage, sold his apartment, moved in with his parents, and grew the business – which he sold in 2003 for $50 million. He used the proceeds to start Muvo for Her, the world’s first sparkling vodka pink liqueur.

The common thread with these Big Idea guests is they were unknown individuals sitting in the backyard sipping iced tea (or a blue slush) when the Big Idea came to them. After mulling the idea over, reducing it to paper, talking with friends and family, each person had to come to the point where they would chase the dream or abandon it. Once the decision was made to pursue their dream and implement The Big Idea, everyone faced the challenge of convincing thousands and millions of complete strangers to trust them enough to buy into this particular Big Idea.

You can eat at any one of thousands of restaurants. Why Hooters? You can drink pink lemonade, why a blue liqueur? Mega corporations have hundreds of excellent PR, marketing and advertising firms to select from. Why Deutsch Inc.? None of the guests on “The Big Idea with Danny Deutsch” spent thousands of dollars on media advertising to entice buyers, diners or investors to choose their product or service over many others. Instead, they relied on publicity as a tool to reach select audiences that represented the niche market that would be interested in their particular Big Idea. Not all were natural publicists, by any means. Most struggled through trial and error, enduring many failures and disappointments before discovering that PR was the key necessary strategic tool. Thus, some took longer than necessary to achieve their dreams because they lacked PR skills and had to acquire them through experimentation, which is difficult and time-consuming. And so everyone with a Big Idea faces a choice – be a self-publicist and delay success or hire a PR firm to achieve your dream much more quickly.

As founder and president of Westwind Communications, I have helped many clients with Big Ideas achieve the American Dream. One inventor had a handy tool-organizing product for the garage or to store mops, brooms and dusters in closets. We organized a publicity campaign that included a New York Times feature article which ultimately resulted in the product being placed in several large retail outlets.

Before laser eye surgery became popular in the U.S. I conducted a publicity campaign for a laser surgeon in Canada to convince the American public that laser surgery was safe, painless and highly successful. People naturally are very fearful of eye injuries or complications and had to be convinced that the laser procedure really was safe. Now laser surgery is a billion-dollar industry and safety is taken for granted by most – because of PR. The highlight of that campaign was one of the first laser eye surgeries ever performed LIVE on FOX-TV.

Another client with a Big Idea was a lady who wanted to rescue thoroughbred horses that, after being retired from racing, were being slaughtered and sold for meat to be eaten in European and Asian restaurants. Her Big Idea was great but her financial means were limited. So publicity was used to gain television and radio interviews to get others to make financial contributions to keep The Big Idea alive. We used hot news pegs, such as the Kentucky Derby, Preakness, Belmont, and the Michael Vicks case to keep re-telling her story in the mass media. The effort landed dozens of interviews culminating with a feature on ESPN. The bottom line: While the US House of Representatives passed the bill and smaller measures, no federal ban exists. Horse Slaughter is legal in the United States but the public is now aware of this practice due in great part to our efforts and those of others demanding a ban.

A blind author who was upset by the violence in children’s nursery rhymes contacted us. She wanted to recite wholesome poems to grandson Jack and so wrote him a book of non-violent nursery rhymes. Her Big Idea was to have an impact on children’s literature so that grandmothers across the nation could have better choices in bedtime reading for their grandkids. We launched a PR campaign that resulted in this blind poet with a Big Idea being interviewed by numerous media outlets including WCBS-TV in New York.

Several times during my career in PR and marketing, I have met fascinating people with Big Ideas. I have taken great personal satisfaction in using my public relations and marketing skills to help these inspiring American Dreamers achieve their dreams. And so when I listen to guests on “The Big Idea with Danny Deutsch” I know from personal experience that the biggest idea of all is that the key to success is a successful publicity campaign aimed at just the right market.

If you want to find out how a professional publicist can make your Big Idea come to fruition please contact my firm at: 734-667-2090, www.westwindcos.com. We’ll make it happen.

About Scott Lorenz
Scott Lorenz is President of Westwind Communications, a public relations and marketing firm that has a special knack for working with doctors, lawyers, inventors and authors. His clients have been featured by Good Morning America, FOX & Friends, CNN, ABC Nightly News, The New York Times, Nightline, TIME, PBS, NPR, the Los Angeles Times, USA Today, Washington Post, Family Circle, Woman’s World, & Howard Stern to name a few. To discuss how Westwind Communications helps its clients get all the publicity they deserve and more, call 734-667-2090 or email: scottlorenz@westwindcos.com . Visit: http://www.westwindcos.com