You are here: Home1 / Best Sports Cliches Ever 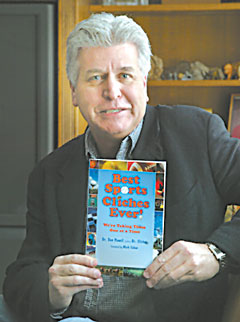 DETROIT — Don Powell has heard it all before, and not necessarily in his day job as a psychologist.

The lifelong sports fan’s memory is crammed with any number of sportscasters describing “Cinderella stories,” coaches speaking of “beating ourselves” and athletes “giving 110 percent.”

Flying from Texas to Detroit a year ago with nothing to read, a bored Powell began jotting down sports cliches. By the time his plane touched down, he had 315 of them.

An obsession was born. So was a book.

Powell, president of the American Institute for Preventive Medicine in Farmington Hills, eventually accumulated more than 4,000 sports cliches. He winnowed the list down to 1,771 and then self-published “Best Sports Cliches Ever!” The 192-page paperback has been on sale since mid-September online, through Amazon.com and in bookstores.

Powell says his interest in cliches, spoken and written, goes back to his childhood in New York.

“Some things just captivate you,” he said in a recent telephone interview. “Going to these games, I was always interested in these cliches that my dad or the fans around me would use. I was intrigued by the fact that in just a few words you can create something very visual.”

“It’s like shorthand. It’s a way of communicating quickly,” especially during real-time broadcasts when the action is unfolding, he said. “We complain about them, but we use them. … You’re trying to appeal to a large audience. Cliches kind of help you bridge the gap between the veteran (sports fan) and the rookie.”

Powell once played out that scenario in Detroit.

“My friend and I went to a Lions game and we talked entirely in cliches. We’d say things like ‘He really got separation on that pass,”‘ which means the receiver got far enough away from his defender to make an uncontested catch.

“And people around us started interjecting, talking in cliches. Everybody had some. It’s almost like a fan club where there’s a secret handshake among sports fans.”

Powell acknowledges that many cliches have gone bad by being left out in the open too long.

Respondents to his online poll at bestsportscliches.com said the most overused cliche was “‘We’re taking them one at a time,’ followed closely by ‘He’s giving 110 percent.’ And the third one is, ‘This is as big as it gets,”‘ he said.

Powell said many sports figures’ reliance on cliches is the product of “a lack of creativity … It’s like they’re imprinted in your brain.” At the same time, Powell said — slipping into cliche-speak of his own — “They don’t want to create fodder for the other team’s locker room. They try to keep things under the radar screen.”

Harry Atkins heard thousands of cliches uttered by hundreds of athletes while working from 1979-2000 as Michigan sports editor for The Associated Press.

“Alan Trammell comes quickly to mind,” Atkins said of the longtime Detroit shortstop who is heading into his third season as Tigers manager. “Because Alan is such a good guy, but also a shy guy. He grew up with television, so that’s what he heard and it was easy for him … Tram spoke in cliches constantly.”

Football was a prolific source of cliche-speak, said Atkins, a member of the Michigan Journalism Hall of Fame.

Former Michigan State football coach George Perles “was good for a ton of those things,” Atkins said. “‘One game at a time’ was huge.”

Indeed, Powell’s book lists more football-related catch phrases than any other sport, and his nominee as the most prolific cliche generator is “Monday Night Football” analyst John Madden. But, he adds: “You cannot describe sports without cliches. If you banned Madden’s cliches, there’d be a lot of dead air.”

Sports cliches ultimately do what the sight of a classic car or the sound of a now-graying rock band can do, Powell said.

“The concept of familiarity breeds comfort … to remind us of a time in our youth when we were stress-free,” he said. “The same comfort comes from words.”

ACCORDING TO WEBSTER: Cliche (n): A trite expression or idea.

ACCORDING TO PSYCHOLOGIST/SPORTS FAN DON POWELL: Sports cliches are valuable because they use only a few words to express complex thoughts or actions; their familiarity creates a comfort zone.

TAKING IT TO THE NEXT LEVEL: Powell ranks “Monday Night Football” analyst John Madden as the most prolific purveyor of cliches in sports broadcasting.

Related story:
Here’s the way they use cliches