Best Sports Cliches Ever In The Detroit News

You are here: Home1 / Best Sports Cliches Ever In The Detroit News

By Peg McNichol / Special to The Detroit News 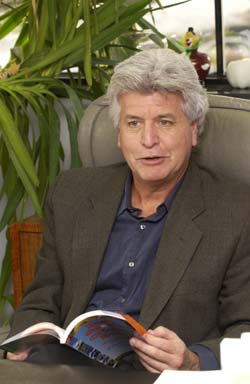 FARMINGTON HILLS — Don Powell is a collector. In the lobby of his Farmington Hills company, American Institute for Preventive Medicine, pewter sculptures depict people beating smoking and other bad habits. The sills of his corner office window are lined with a series of apples: glass, ceramic, wood and others, all a reference to the company motto, “An apple a day is not enough.” Assorted antique irons, for pressing clothing, not for golfing, are kept at his West Bloomfield home.

“I’ve never used an iron in my life. I just liked how they looked,” said Powell, who by day is the CEO of the institute, which provides businesses with consumer health information for smoking cessation, weight control and other wellness issues.

Powell has written extensively on health care, but he’s put a good deal of his focus on a collection of sports cliches in book form: “The Best Sports Cliches Ever!”

The self-published paperback started when he and pals Sheldon Kay of Farmington and Joe Benenholz, former psychology student of Powell’s, made a game of talking only in sports cliches during sporting events. Powell, a licensed psychologist, noticed an immediate ripple effect in fans sharing the stands. They added lines or created their own cliched conversations in what amounted to a verbal wave.

“We criticize cliches, but use them all the time,” said Powell, estimating that half of all conversations depend on cliches. He has been a lifelong fan of sports and its iconic language.

Cliches may be considered laziness in a writer, but allow speakers “to avoid the work of having to think of a new way of expressing the idea every time he or she wants to express that idea,” said Mike Smith, associate professor of linguistics at Oakland University.

Powell started documenting sports lines while traveling by plane from Austin to Detroit, just to see how many he could remember. By the time the plane landed, he’d jotted 315 on a legal pad and the idea for a book was born. With the help of friends and his two sons, Jordan, 23, and Brett, 19, the list grew, from “we came up big time” to “he jumped the gun.”Sports fans who have read the book say it’s as comforting as hearing Ernie Harwell say a guy in the stands from Hazel Park just caught the fouled baseball. While “The Best Sports Cliches Ever!” includes Yogi Berra’s quip “It ain’t over, ’til it’s over,” none of Harwell’s best-loved lines made it. Powell thought they might be too regional or not translate well in print. For example, folks from around here know Harwell for his “loooooong gone!” Description of home runs.

“I guess he’s right,” Harwell said in a phone interview from his home in Novi.

“If you’re a baseball announcer, you’re on maybe 200 games a year. That’s 180-60 games, plus exhibition games. You have to be what you are. In my case, I never sat down and said, ‘I’m going to figure this out and use this.’ I’d use a phrase and from time to time, repeat it. If people would say they liked it, I might use it again.”

“I guess it gives the person who says it a feeling of belonging to the fraternity,” Harwell said.

It was tough making the final selections for the book, which includes 1,771 classic lines and a 110-question quiz. Brett Powell suggested dividing the list into categories by sport and genre. Jordan Powell edited the final edition.

Don Powell asked Andria Witha, an American Institute for Preventive Medicine employee, to create the book’s layout and design. The final copy was shipped by Delta Printing in Lansing, which returned 7,500 copies last September. Powell started hawking them online through Amazon, Barnes and Noble and on his own site, bestsportscliches.com.

Online reviews have been positive, for the most part.

“We criticize cliches, but use them all the time,” says Don Powell of West Bloomfield, author of “The Best Sports Cliches Ever!”The point of the book

The most overused sports cliches, according to bestsportscliches.com visitors: 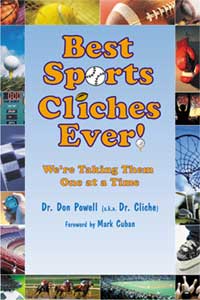