Father challenged daughter to write book. ‘Phoenix Ashes’ given to him for birthday

By Michelle Franzen Martin / Special to The Detroit News

CANTON TOWNSHIP — For months, Rick Carter had encouraged his teen-age daughter, Aimée, to write a book.

She did, after all, enjoy writing fan fiction on the Internet. And based on a few school essays, Carter new she certainly had the talent.

So when Carter found a 158-page manuscript at his bedroom door on his birthday morning last June, he knew his encouragement had paid off.

“It was my birthday present to him,” said Aimée, a 16-year-old junior at Canton High School. “He read through it and decided it was good enough.”

So good, in fact, that it was published in December by Word Association Publishers of Tarentum, Pa.. The book, “Phoenix Ashes,” is available on Amazon.com, at Barnes & Noble stores and at the Little Book Shoppe on the Park in Plymouth.

Aimée’s story follows the events in a boy’s life from 6 through 14. Protagonist Zac Lucas, is an orphan who has experienced a great deal of pain, including the feeling of being an intruder in the home he shares with his uncle’s family.

In a dream-like sequence, a character named Minty provides counseling and advice. In school, Zac opens up to Elizabeth McCain, who becomes his best friend and shares the ups and downs of young adulthood until something tragic happens. All the events help to shape Zac’s perception of his life. 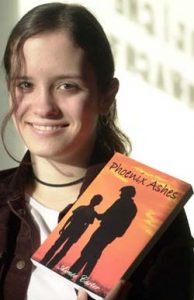 High School junior Aimée Carter is the author of “Phoenix Ashes,” a book about a boy’s life from age six to 14. 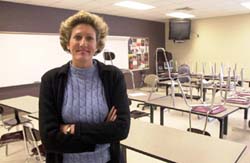 Wendy Gortney, an American Literature teacher at Plymouth, helped Aimée with her book that was published in December.

“The whole book is about perception in that aspect,” Aimée said. “All teen-agers see things in black and white, and refuse to see things in shades of gray. This book is geared toward teen-agers mostly, told in the way teen-agers would think.

“But I believe a lot of adults would read it, especially if they have teen-agers of their own, because they can relate to it.”

It took just five weeks to write her novel, which runs 254 pages in book form. The idea came to her while she was jotting ideas in her journal and the song “Counting Blue Cars” by rock group Dishwalla came on the radio.

“It just happened, it just converged,” she said. “I didn’t actually plan on writing anything until I got the idea, and I got it the day before I started writing.”

Aimée worked on the novel a few hours each night, in between juggling two jobs and maintaining A’s and a few B’s at school.

“I tend to be extremely fast,” she said. “I type about 180 words a minute. When I write, my head is almost in a movie format, and I type what I see. It’s like I’m watching a movie with my fingers moving, and not realizing what I’m doing for the most part.”

Aimée’s tale fits in the genre of fantasy — not surprising, considering many of her favorite authors are from that category. She enjoys JK Rollings, author of the Harry Potter books, and science fiction/fantasy novelist David Eddings.

In fact, the Canton Township teen started writing because of Rollings. About a year and a half ago, Aimée began writing fan fiction about Harry Potter on the Internet. Fan fiction involves writers creating stories about an existing character — Harry Potter, for instance — and posting them, usually on the Internet.

“It’s how I learned to write because it really helps people learn their strengths and weaknesses,” Aimée said. “Fan fiction is a little community, a kind of shelter of people who care about writing and want to do so and improve.”

Looking back, Aimée now realizes how much influence her mother, Michele Ouellette, had on the book. Her mother died six years ago.

“Her whole philosophy was to take life as it comes, to live life to its fullest,” Aimée said. “That’s all over my book. My mom’s philosophy is woven into my writing, in the plot and how characters think.”

Aimée has finished the manuscript for a second novel in what she plans as a trilogy, and gave it to her dad for Christmas. She expects it to be published by summer.

As for what’s next, her dad said he hopes Aimée continues to write.

“It would be an absolute shame if she doesn’t keep writing,” Carter said. “Her only concern is that she won’t be able to make a living at it.”

Aimée plans to attend the University of Michigan or Sarah Lawrence College in New York and major in psychology. Other goals also are ambitious: to sell 10,000 books and appear on David Letterman’s show.

But as Aimée’s 17th birthday approaches this Friday, it’s only fitting to ask if there’s anything else on her wish list. Another publishing deal, perhaps? Or the idea for her third novel?

“I want a second hole in my ears, actually,” she said.