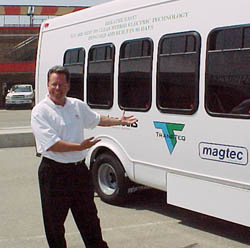 Paul Szilagyi shows off… the FASTM during the 2002 Future Truck Competition at California Speedway near Ontario.
By Bill Moore

Meet the airport shuttle bus of the future.

A white shuttle bus — the kind you’d find at any airport in America — sat outside a trendy little bistro in downtown Claremont, California. But instead of some hotel or transportation company logo emblazoned on its side, this 15 passenger bus was festooned with numerous corporate logos.

A half dozen automotive reporters walked pass the bus, enjoying the pleasant evening breeze off the Pacific Ocean, anticipating the prospect of having a nice late evening dinner at Ford Motor Company’s expense.

Some drifted inside the restaurant, but a few of us stopped to inspect what turned out to be anything but an ordinary airport shuttle bus.

What kept us outside on the tree-lined sidewalk instead of getting on with the demanding business of schmoozing on free hors d’oeuvres and wine?

It was FASTM, the world’s newest and — for now — only hybrid-electric shuttle bus, the creation of a remarkable partnership that includes Ford Power Products, AAM, Supreme Industries, TransTeq and Magtec. Hence the FASTM moniker.

The story behind FASTM is almost as interesting as the technology underneath and ironically enough, the story kind of begins just a few blocks from this restaurant on the campus of Harvey Mudd College. It was here the lead engineer on this project, graduated only a couple years earlier, but I wouldn’t learn this until later in the evening.

For now, the handful of journalists who stood outside were regaled with a blizzard of details and facts by TransTeq’s energetic CEO, Paul Szilagyi. Paul clearly enjoys the limelight and seems to never tire of talking about his company’s latest creation.

TransTeq is based on Denver, Colorado. Its chief claim to fame, up until now, was the manufacture of 36 hybrid-electric buses that serve some 60,000 passengers-a-day in downtown Denver. It was that order that provide the technological expertise to tackle this project.

According to Szilagyi, the company chairman, Dr. Richard McDermott, called Omer Kropf the president of StarTrans Bus to see if there was a market for a hybrid-electric shuttle bus. Kropf replied, “There is a tremendous need for this vehicle because nobody wants to breathe exhaust fumes while waiting to be picked up at the airport.”

That conversation resulted in an initial planning meeting in early March of this year. In just 90 days – and Szilagyi said it was actually even less than that – the partners, lead by TransTeq who did the hybrid-electric conversion and controls – converted the standard Ford E450 chassis into a series hybrid that runs on propane.

The conversation was just starting to get interesting when we were all herded into the restaurant for free drinks and stuffed mushrooms, followed by a sumptuous dinner, hosted by Ms. Sue Cischke, Ford’s VP for Environment and Engineering Safety.

But before we sat down to eat, we were again ushered outside for the official introduction of the FASTM bus. Again, Szilagyi went through his presentation, accompanied by Paul Moore, Ford’s director of its Power Products unit.

Moore explained that Ford contributed the E450 chassis and a small V-6 engine that runs on “dry fuel”, in this case propane. These engines are designed for the stationary power market as generators.But in this case, it was a perfect match for the hybrid-drive system TransTeq had in mind.

Here’s the basic scheme the team came up with.

FASTM, pronounced “fast” — the “m”, Szilagyi teases, is “silent” — incorporates “off-the-shelf” components. A Magtec TD8 permanent magnet motor (100kW peak, 134 hp) drives an new AAM rear axle, from the rear. What TransTeq did was flip the differential and axle so it pointed towards the back of the shuttle instead of the front. This innovation gave them room to mount twin 93 gallon propane tanks in front of the rear axle for safety. [Computer diagram].

The Ford V-6 generator is capable of producing 40kW continuous electrical power, which charges a bank of 28 lead acid batteries rated at 370 volts. These are mounted under the passenger seats and are accessible from the outside of the bus. The prototype control system also sits under the passenger bench on the driver’s side, and according to Josh Anderson, the 20-something Harvey Mudd grad who is the engineering in charge of the project, it could be made about one-third its current size.

Anderson is slim and boyish, certainly too young to be the project engineer on something as ambitious as FASTM. But there’s little doubt that he knows his stuff. Over dinner he explains that he’s been reading EV World since his college days. Once he graduated, he set out for Denver and eventually landed a job with TransTeq. He recounted for me the number of times the shuttle bus was shipped back and forth between the Supreme Industries’ StarTrans Bus division in Goshen, Indiana and Denver, Colorado. It was something like 5 times. Interstate 80 has been a popular route for EV’s this Spring and Summer.

FASTM is designed to operate — depending on various factors like terrain and climate — on electric power only for up to 30 miles. Szilagyi estimates the propane-fueled IC engine will run about two-thirds of the time during normal operation. In shuttle service, it can run for 10 hours solid and has a highway range of 450 miles.

After dinner, we crowded into the bus for the ride back to the hotel, giving us the opportunity to experience the bus in action. Despite a little jarring of the differential as the bus accelerated – attributed to some gearing mismatch in the axle – FASTM was amazingly quiet and smooth once up to speed (top speed is 60 mph). I estimate we operated in ZEV mode for a couple miles before the engine came on.

At the hotel, after everyone piled off, I hung around briefly to talk to Szilagyi and Anderson about their creation. TransTeq’s CEO is enthusiastic about his design and its series architecture. He argues that it is the only approach that can be readily adapted to virtually any type of engine or fuel from diesel to gasoline to natural gas to hydrogen. Anderson noted that with a quick change in the software the bus could be running on a fuel cell.

How much more would this shuttle bus cost operators, I asked. Right now, about 50% more than a conventional one, Szilagyi admits, but he and Anderson are convinced that they can bring that cost down to as low as just 10% higher over the operating life of the vehicle.

I hope they can do it and that someday when I wait for an airport shuttle, at least the air in front of the terminal will no longer be thick with the rancid stench of diesel fuel. Instead, hotel and rental car shuttles will glide by silently in tribute to this 90-day wonder